Winter in Minnesota isn’t for the weak of heart. It’s not just the cold temperatures and heavy snowfalls that are brutal – it’s also the fact that winter lasts for so long. A quality snow blower will help make your next Minnesota winter a little easier.

Sure, there’s no denying that a snow blower is an expensive investment, but it’s more than worth it for the ability to quickly and efficiently clear your driveway and sidewalk of snow. Keep reading to discover exactly how to buy the best snow blower for Minnesota winter.

Here’s a quick glimpse at our list of best snow blowers I’ve narrowed down for you.

Keep reading below for more info on these snow blowers and accessories. 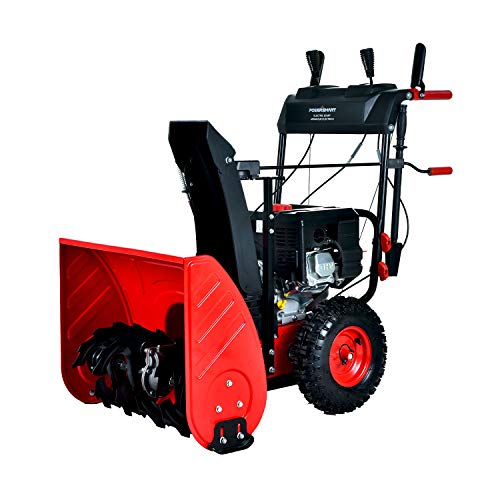 Another top-quality snow blower is the PowerSmart Corded Snow Blower, which excels in very deep snow.

The gas-powered two-stage machine has 6 different speeds to clear snow up to 20 inches of snowfall with a single pass.

Equipped with both a recoil start and an electric start with an extension cord, its powerful 212cc engine make this machine a great choice for those with very long driveways. Other highlights include its ability to throw snow up to 40 feet, a clearing width of 24 inches, and a self-propelled system.

Just take a look at the over one-thousand positive reviews! 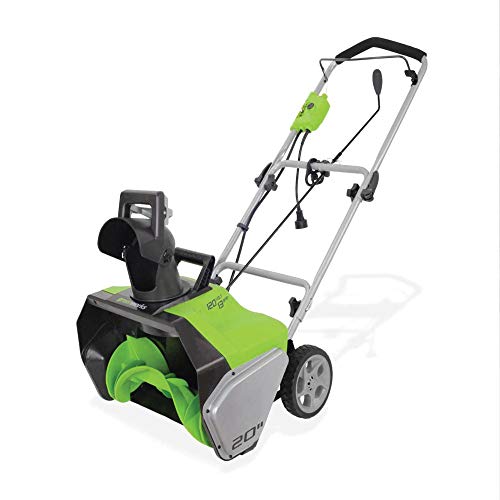 You’ll be hard-pressed to find a better snow blower for Minnesota winter than the Greenworks Snow Thrower. This 30-pound machine works powerfully despite being electric powdered, breaking through heavy snow without missing a beat. It throws that snow up to 20 feet so the snow pile never gets in your way as you work.

The 4.3 stars on Amazon (with almost 4000 reviews!) prove that this Greenworks snow blower is lightweight, easy to assemble, and has straightforward maneuverability. Get the snow plowing job done knowing that you’re also doing mother nature a favor by going electric. 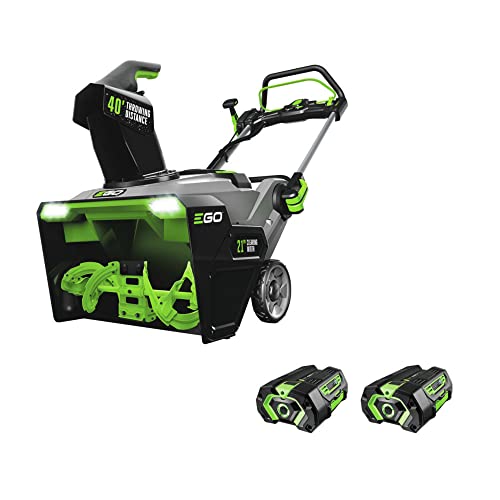 The EGO Power Snow Blower is another electric snow blower capable of handling anything a Minnesota winter can throw at it. This one, however, is cordless, meaning you have much more freedom of movement thanks to its two EGO 56V ARC Lithium batteries.

The machine throws snow up to 40 feet, and its steel auger allows it to cut through tough ice faster than most machines with a clearing width of 21 inches.

But what we like most about this model is the adjustable chute. The snow will go wherever you want it to blow. Plus, this snow blower also comes with LED lights, allowing you to get your snow blowing done at any time of the day or night. 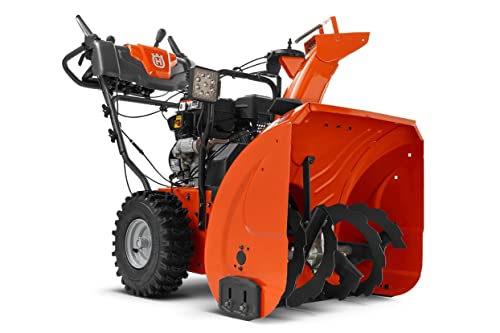 Many snow blowers, even some of the most expensive models, just don’t cut it when it comes to clearing snow from uneven terrain.

The Husqvarna Snow Blower has you covered here. It’s built from the ground up for uneven, gravely, and rocky terrain, including steep hills and inclines.

It’s a rugged gas-powered two-stage model built with durability in mind. You can give this thing a beating year after year and it will stand up to the abuse.

This snow blower weighs just a little less than 200 pounds. It features easily maneuverable trigger control power steering, a 208cc OHV engine, and throttle control to put the engine on idle when you need to take a break. 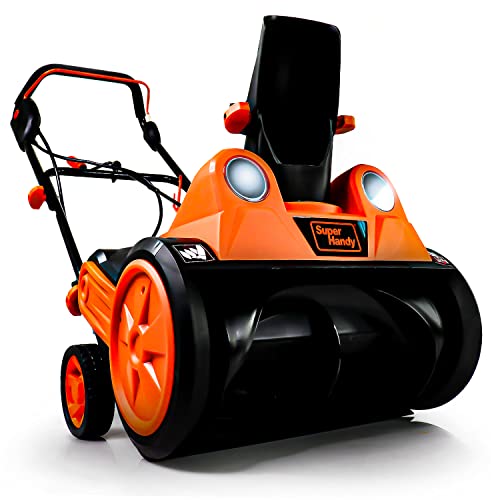 Not everyone needs or wants a top-of-the-line snow blower capable of plowing through multiple feet of snow. For those that want something simpler and more affordable, there is the budget-friendly SuperHandy Electric Snow Thrower with over one hundred positive reviews!

This 15 amps electric brushless motor model is lightweight and easy to push. It can clear an 18 inch wide path through snow up to 10 inches deep.

Despite the electric engine, this snow blower can displace 720 pounds of snow per minute, throwing snow up to 25 feet in the air. Other notable features include the 180 degree rotating discharge chute and hardy polypropylene auger blades.

Most snow blowers will get the job done on their own in stock form. However, there are numerous accessories that can make the job even easier.

Here are the best snow blower accessories to accompany your snow blowing chores:

The best snow blowers run well with their original tires. However, sometimes the winter weather conditions warrant chains, which allow the snow blower to work better on hilly terrains as well as ice (just like tire chains for cars!).

Your snow blower likely doesn’t come with tire chains, so consider purchasing ones like Rotary Snowblower Tire Chain to insure you’re prepared for the iciest conditions. 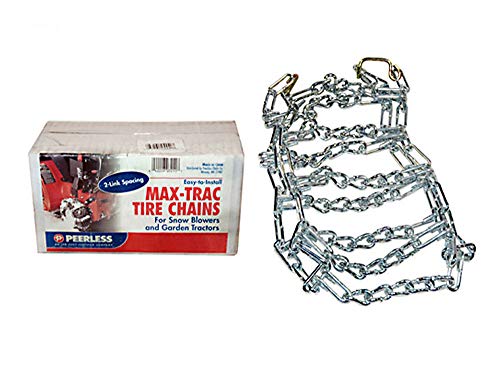 Want to take snow-blowing to a whole new level? Need some heavy-duty snow removal, and already own a tractor? Then consider a snow blower attachment. The NorTrac Snow Blower, for example, attaches to your tractor for a one-two punch that’s difficult to beat. 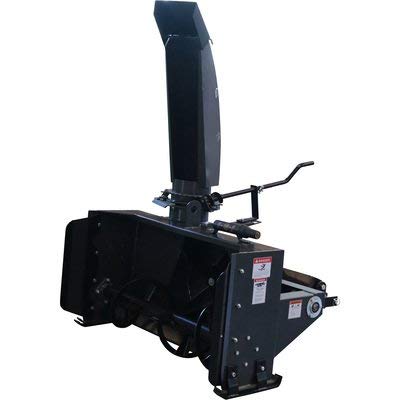 Protect yourself from the elements with a snow cab. Attach this accessory to your snow blower to create a shelter so you can work in rain or snow with ease.

Make sure that you select a snow cab that works with your model of snow blower. The Arnold Deluxe Universal Snow Thrower Cab works with most popular models. 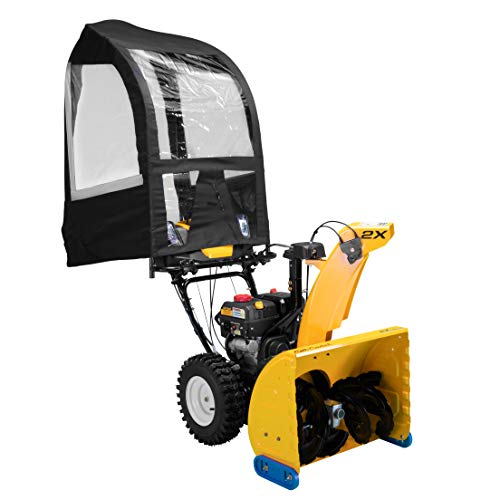 Do You Need a Snow Blower?

Like I mentioned earlier, not everyone actually needs a snow blower, but they’re certainly helpful for those living in an area with high snowfall, like Minnesota.

The main exception is those with a minimal area to keep clear of snow. For example, if you live in an apartment or a home without a driveway, a snow shovel will likely get the job done just fine.

Even those with a driveway don’t always need a snow blower. Sometimes it’s actually quicker and easier to just shovel snow out of your driveway rather than taking the snow blower out of the garage, setting it up, completing the job, and putting it back in the garage.

Sometimes, it’s also easier to work a snow shovel around parked cars. To efficiently move snow with a snow blower, it’s best to first move your car to clear a path. All of this isn’t to say that a snow blower isn’t incredibly beneficial – because they have a ton of benefits.

For instance, a snow blower is a much better choice for those that need to clear large areas of snow, such as a long driveway. These machines are also a good choice for those with health issues (that make it difficult to shovel snow) or those that just prefer a snow removal method that isn’t backbreaking.

Consider the following factors to decide if a snow blower is right for you:

The benefits of a snow blower are numerous, especially somewhere as snowy as Minnesota. An understanding of these benefits might convince you to buy one of these machines, even if you’re a longtime proponent of shoveling snow.

There are dozens upon dozens of different snow blowers available on the market. Still feeling overwhelmed, even after going through my 5 recommended products? Here are two more things to keep in mind while considering your options:

There are three main types of snow blowers available for residential use.

A single-stage snow blower is the lightest type.

Their light weight also makes them the easiest to handle. The catch is that most don’t have engine-driven wheels. In other words, you have to push this type of snow blower through the snow yourself.

For single-stage models, you have three main sub-types to choose from: corded electric, cordless electric, and gas-powered.

These models are best for 8 inches or less of snowfall at a time.

Double-stage snow blowers are what most people think of when they think of a snow blower.

These powerful models have engine-driven wheels to propel them through deep snow – all you have to do is steer the way. Another notable feature is the auger which collects the snow and the fan that blows it out of the way.

All double-stage snow blowers are gas-powered.

These models are best for 8 inches or more of snowfall at a time. The exact depth you can go through depends on the height of the model (some clear up to 24 inches at once).

A triple-stage snow blower is the most powerful and most efficient of all.

They utilize the same two stages as a double-stage model (the auger to pick up the snow and the fan to blow it), but include an additional accelerator to speed up the process even more.

All triple-stage snow blowers are gas-powered.

The best of these models work 10 times faster than a double-stage model, even in deep, heavy snow.

Spend a few minutes looking at snow blowers, online or in a store, and you’ll quickly realize there are dozens of different possible features.

The snow blower features that matter most include:

Most two-stage and three-stage models have a speed control. Multiple forward speeds not only enable you to complete the job faster when conditions allow, but also prevent clogging in heavy snow.

Many snow blowers require two hands to operate. Single-hand models, however, place both the speed and auger controls on the same handlebar. This frees up your other hand to control the chute.

Clearing width is the width of snow the snow blower passes over at one time. Intake height is how many inches of snow the machine can clear at once. Both factors determine how quickly the machine does its job.

No one wants to be stuck in the snow pulling a manual recoil-starter. The best models have an electric start to make the process easier. Most rely on a plug-in electric start but also have a manual start for when you’re away from a plug-in.

Snow blower models with a joystick or remote chute control give you the ability to change the direction of the chute at a moment’s notice.

How to Use a Snow Blower

Learning how to use a snow blower is pretty straightforward. But rather than winging it on your first time using the machine, get an understanding of the basics first to make the experience much quicker and more efficient.

Here’s exactly how to use a snow blower:

Avoid blowing snow directly into the wind. If possible, run the blower so the snow blows with the wind. Otherwise, the snow will blow right back to where you’re removing it.

Take time to decide where you’d like the snow to pile up. This will help you decide upon a pattern so you’re not tossing snow into your path. Remember to throw the snow as far away from your driveway as possible to prevent it from blowing back.

Start with a run down the middle of your driveway. From here, the best snow blower pattern is to work in a “circle” with passes up and down the length of the driveway. Start from the center line and work towards the edges of the driveway.

It’s tempting to rush a project like home snow removal. But it’s always best to work slowly and steadily with your snow blower. Not only can moving too quickly clog the machine, but it’s also much more dangerous.

5. Keep Up with the Snowfall

Remember that it’s dangerous to use many snow blowers on snow covering a gravel surface. The machine can easily pick up the pieces of gravel and throw them at high speeds over a long distance. If you plan to use your snow blower on gravel, be careful to select a model made for such a use with the help of our buyer’s guide below.

If you live in Minnesota, you already know just how much snow even “mild” winters bring. So why not be prepared? Although many people do well with a simple snow shovel, there’s no denying that a snow blower makes clearing snow quicker, easier, and far more efficient.

Next, keep reading about winter life in Minnesota to discover comprehensive guides, suggestions, tips, and more!