As another Memorial Day comes and goes, our country collectively remembers those who fought and died in the service of our nation. I was fortunate enough to serve alongside some of these brave men while in the Marine Corps. Like me, many of the guys had enlisted shortly after September 11th. These people, from different parts of the country, with different backgrounds, were seeking out the fight.

My brothers that were lost in Iraq and Afghanistan are always on my mind; everyday is Memorial Day for me. Now, as a high school teacher, I have the opportunity to tell the stories of these brave men to my students. As I tell some of the stories to my classes, I am struck by the fact that when we enlisted, we were not much older than the students are now. Looking back, it is unbelievable to me that the military gave so much responsibility to such young men.

On September 11, 2001, my 19th birthday, everything changed. I was going to Hamline University in St. Paul, MN to play basketball and study to be a physics teacher. After the attacks in New York and Washington DC, I was so angry that I couldn’t go to class. I wanted to fight. So I left school and signed up for the Marine Corps. All I wanted was to be in the infantry and get the earliest possible seat in boot camp so I wouldn’t miss the war.

By the time I got to my unit in 2002, the war in Afghanistan was drawing down and more attention was being paid to Iraq. At the end of the year we were shipped out to Okinawa, Japan. There were rumors that we’d be pulled out of Japan to help in the invasion if we did attack Iraq. As the talk of war increased, it became clear that we weren’t going to play any role in the invasion. Finally, on March 19, 2003, while on a ship heading to mainland Japan for training on Mount Fuji, we were informed that the ground war had commenced. It was a completely somber and demoralized ship.

Since we wouldn’t be fighting I decided to try out for Recon, which was just about as close as the Marine Corps got to having a special operations unit at that time. I was running, swimming, lifting weights and studying late into the nights in preparation for the grueling selection process. My work ethic had caught the eye of the Marines in charge of the Scout-Sniper Platoon. They offered me an opportunity to attend Scout-Sniper School as long as I could pass their screening. 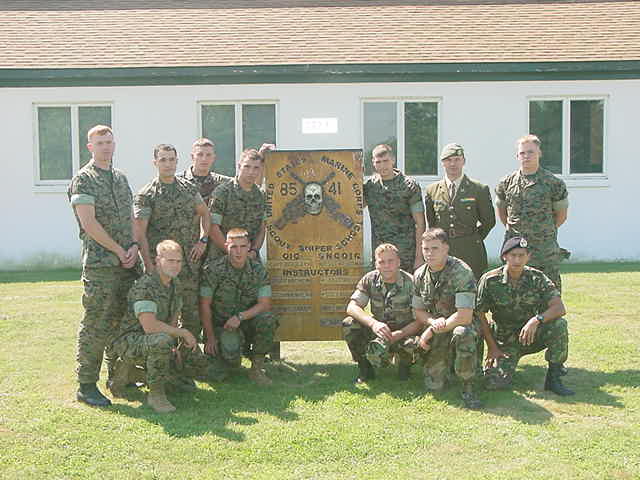 This was a fantastic opportunity. Sniper School is one of the most challenging courses in the Marine Corps. Only the best infantry Marines are sent, and of those few that get a chance, only about 50% graduate. I accepted the offer, passed the screening, and was on a flight to Quantico, Virginia in May 2003.

Sniper School lived up to its billing; 12 of the 28 students that began the course graduated. Becoming a Marine Sniper is one of my proudest accomplishments. The suffering involved in the process of weeding out those who don’t belong, both during the selection phase and in Sniper School is extraordinary. For the remainder of my time in the service, I knew I’d be working with the best that the Marine Corps had to offer.

After returning stateside from Okinawa, we were told that we’d be deploying to Iraq in late-2004. Those plans would change. In February 2004, there was a coup in the Caribbean island nation of Haiti. With chaos in the streets, my unit was deployed to help restore order and keep the peace. It was a short three-month deployment, but long enough to disrupt our scheduled deployment to Iraq. Our role in the war was put on hold again.

The new plan was to deploy to Iraq in the spring of 2005, but with the anticipation of violence during the January elections, we ended up leaving shortly after the new year began. During our seven-month deployment to Iraq I learned a lot about myself and my teammates. We felt every sensation you can imagine: excitement, fear, anticipation, boredom, anger, love, agony, freezing cold, and of course, unbelievable heat. 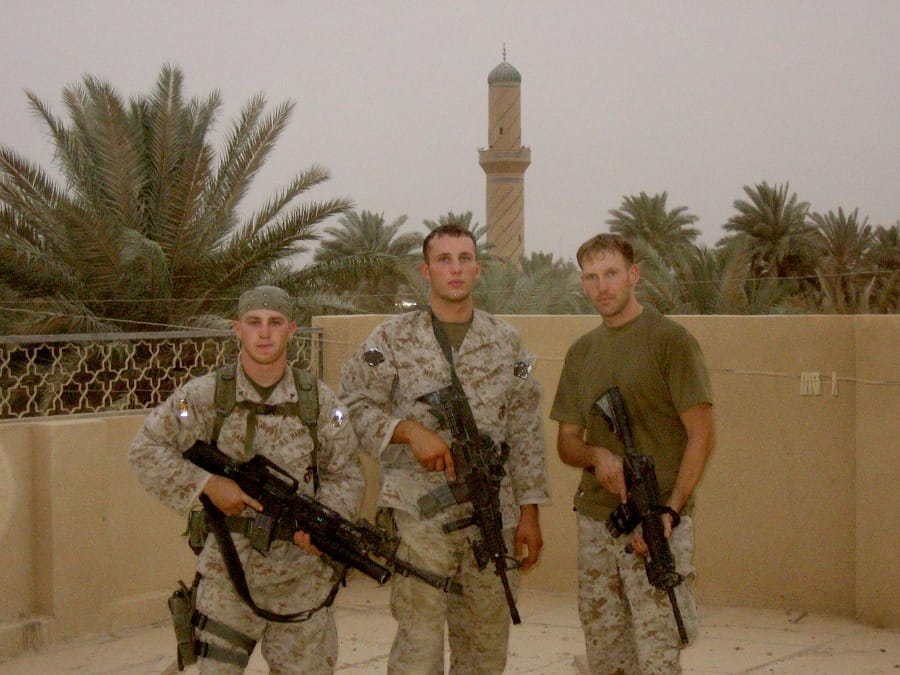 Team 2: Riley on the left, me in the center, Dave on the right.

The brotherhood that develops between Marines through war is unlike any other. For a Sniper team, they are even stronger. Our team was small; there were only three of us. Team 2 was formed shortly after our battalion returned from Haiti. Many of the guys in the platoon were going to different units or leaving the Marine Corps so we had to refill the ranks.

In training, the Sniper Platoon pretty much operates independently of the other infantry units and because we’re off on our own so much, we don’t tend to follow all of the same rules. This rogue appearance and glamorized image of being a sniper makes a lot of Marines want to join the platoon.

Since we operate in very small units for long periods of time, sometimes miles aways from the nearest friendly forces, we require a person that is both physically and mentally able to cope in the most stressful situations. For that reason, we must test the candidates under the most demanding conditions that we can safely create. In simple terms, we make them suffer. Unlike the Navy SeALs or the Army Special Forces, we don’t cut anyone; if you don’t quit then you’ve made it into the platoon. Of course, we make quitting look like a great option!

As the senior sniper in the platoon, I ran the screening program. I took a great deal of joy from inflicting physical and mental stress. It wasn’t that I liked to see people quit, I just loved to see the others succeed. One of the greatest lessons I learned from this process, although very cliche, is that the things of greatest value are those that you had to work the hardest to achieve. I’ve never met a sniper that wasn’t proud of the suffering that he had to endure. 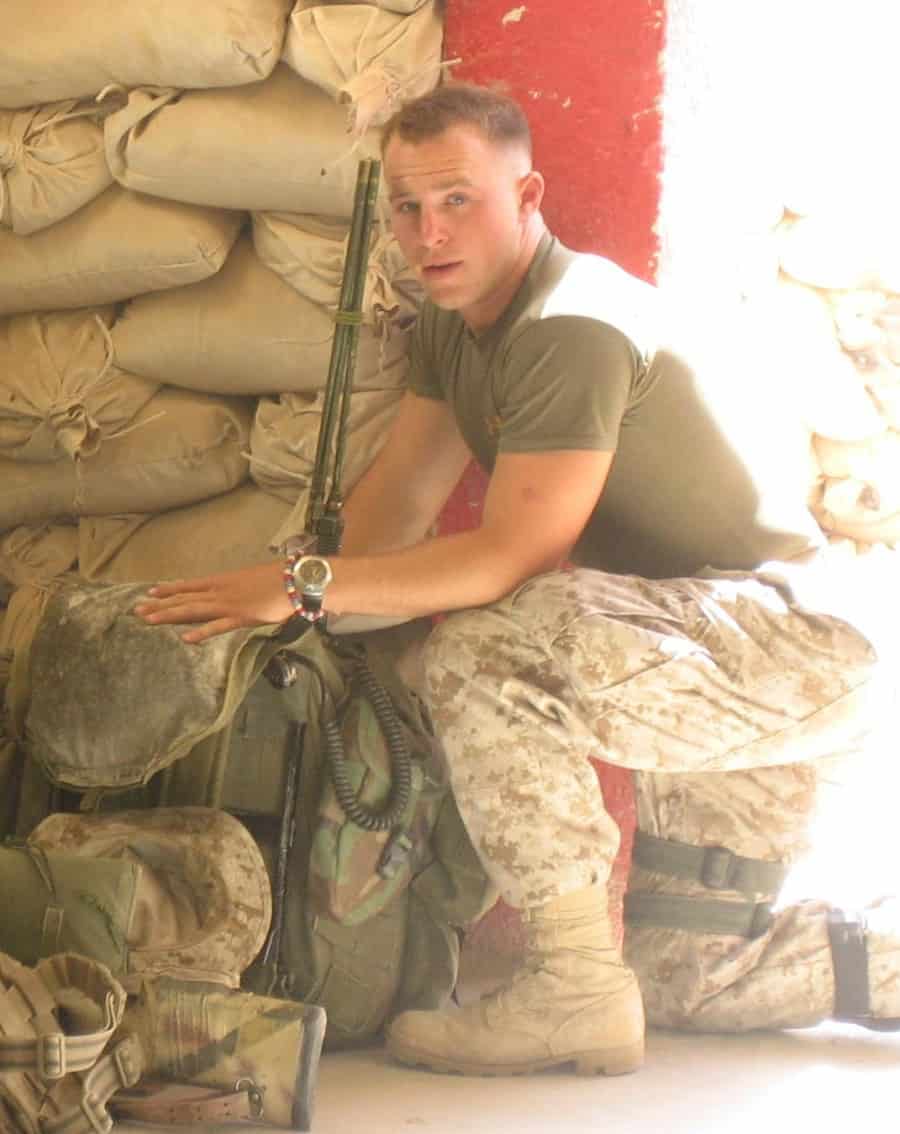 During this screening, there were a few standout candidates. One of them was Riley Baker. Although we didn’t know it at the time, Riley was a state champion wrestler. He loved a physical challenge, so the screening was right up his alley. At one point he even smiled, which was a huge mistake. I realized that we couldn’t break him with physical punishment but after watching him for a few days I knew that he was a “protector.” He would much rather be punished himself than see someone else suffer, so I had him stop the exercise and just watch as we cranked up the pain on the other guys. The smile quickly left his face!

Riley easily passed the screening and I selected him to be on my team. During the following few months of training as we were working up to deploy to Iraq I learned a lot about him. He was the homecoming king, a great linebacker in football, the hardest working guy I’d ever met, tough as nails, liked to fight and would never, ever let you down.

In Iraq, our area of operations was the area between Fallujah and Baghdad in Al Anbar Province. Riley was our point man and radio operator. It was his job to navigate to our objective and set up the communications equipment upon arrival. On one of our first long-range patrols we encountered some irrigation canals that we weren’t anticipating. There was no way to go around them and still make it to our objective by sunrise so we had to figure out a way to cross them. We got to a pretty deep canal and were lucky enough to find a log that stretched across it. Riley took off his gear and led the way, shimmying across. As he got to the halfway point he suddenly slipped off falling into the neck deep canal. It was a humorous break in the stressful patrol. 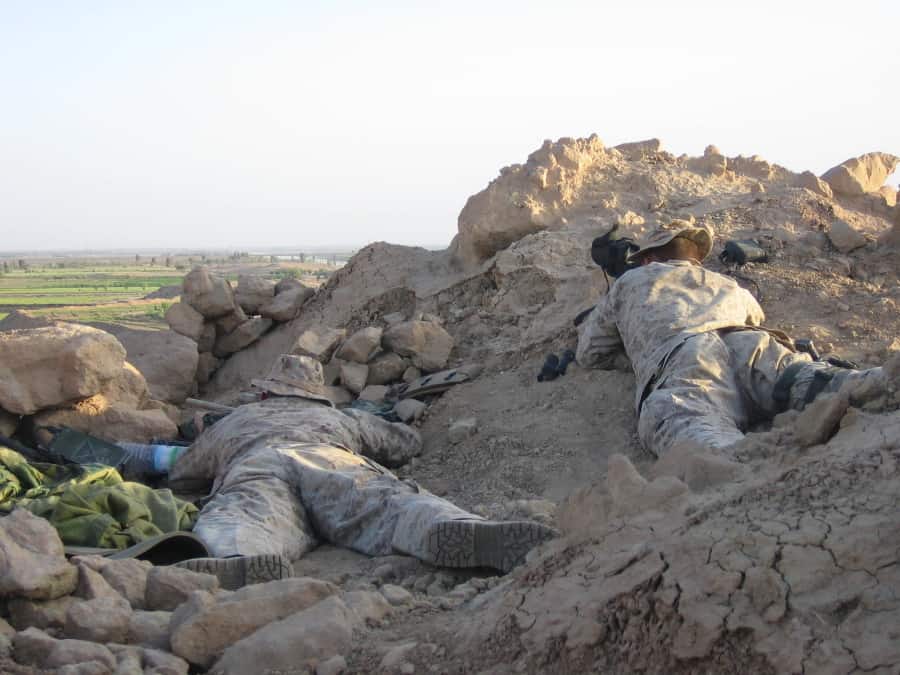 Marines Dave and Riley on a hilltop overlooking a valley.

We made it back to the states in one piece. I left the Marine Corps for a security job in Baghdad and Riley took over Team 2. He was deployed to Ramadi, Iraq in the spring of 2006. Leading his team from a building that was taking heavy fire, Riley absorbed most of the blast from an IED that was planted in the alleyway through which they were moving.

The other five Marines in his team were injured but survived. Unfortunately Riley did not. He died on June 22, 2006. For a “protector” like Riley, it seems very fitting for him to have taken the brunt of the blast. His headstone appropriately reads, “He lay down his life for his brothers.” 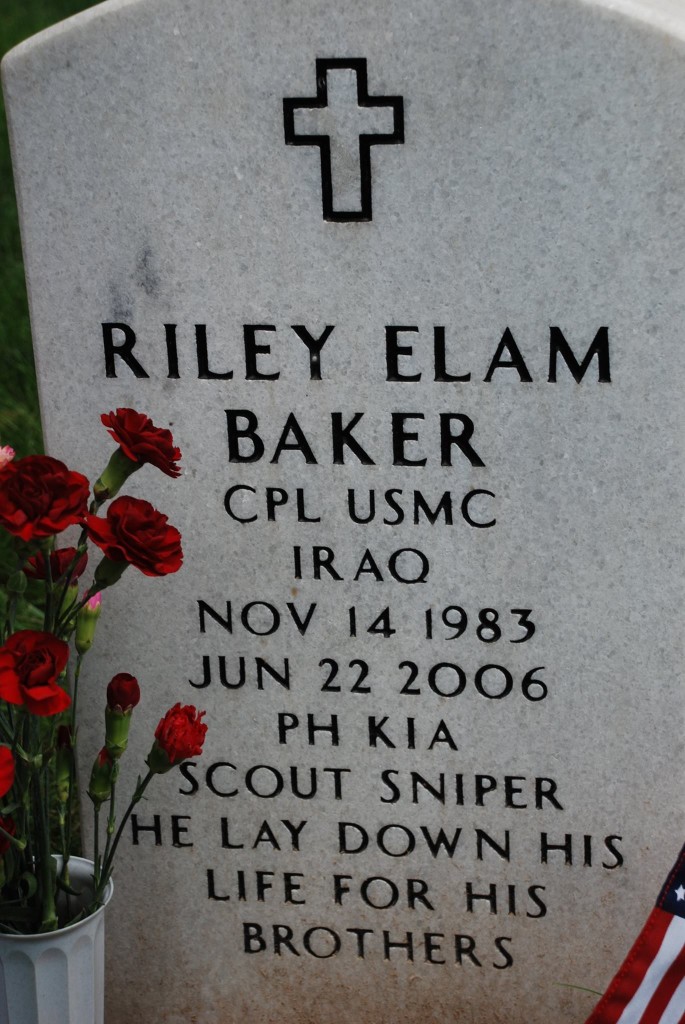 This Memorial Day, and every other day, please remember those who have given everything for our country.

Well said, will always remember the sacrifice of you guys,Thank You all for your service. you are are always in my heart and prayers. Mom Dinges!