We’ve all heard the saying. You can take the kid out of Minnesota, but you can’t take Minnesota out of the kid. Few truer words have been spoken about Cannon Falls native, Caitlyn Smith. The singer, songwriter and recording artist appreciates—and even craves—her home state. 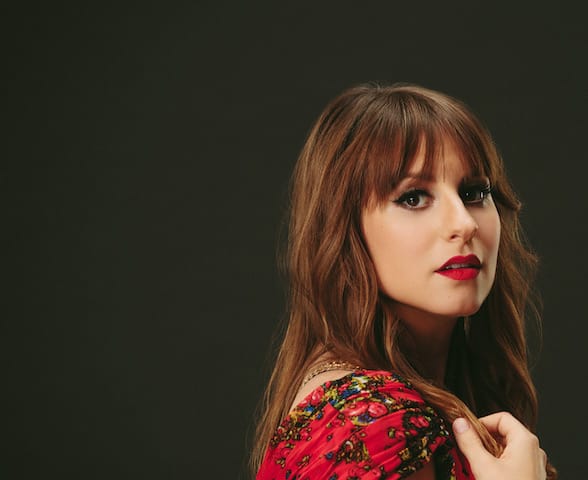 Minnesota native, Caitlyn Smith, has made a name for herself in Nashville as a singer, songwriter and recording artist.

“My Minnesota roots touch everything I do; I carry that all with me.”

“I love everything about Minnesota,” the singer/songwriter quips. “Fishing, hiking, cross country skiing, snowmobiling. There’s so much to do. And there’s also a long john donut at the Hi Quality Bakery in Cannon Falls that wakes me up some nights.” She usually takes that as a sign that it’s time to come home for a visit, which she often does.

Though she’s been making the trip from Cannon Falls to Nashville since age sixteen, and formally took up residence about eight years ago, she strongly credits her Minnesota upbringing for the person she’s become. “Minnesota is home. It grounds me. My Minnesota roots touch everything I do; I carry that all with me.” She still has a 612 cell phone area code, in fact.

“My parents sat me down after I won and told me people were asking to buy my music.”

Smith began her singing career at a very young age—singing at church services, belting out the national anthem before ball games and performing in talent shows, all while she was still in elementary school. When she was in high school, she started playing gigs in Minneapolis. Then she won the Minnesota State Fair Amateur Talent Contest, and people definitely took notice. “My parents sat me down after I won and told me people were asking to buy my music. My Mom and Dad saw how serious I was about making music in the future and offered to use my college savings to record an album.”

Caitlyn says her parents were always one-hundred percent supportive of her dreams of becoming a musician. “They were totally invested. They drove me to every show. My mom curled my hair before every gig. My Dad taught me the first chords I ever played on the guitar. He would scour eBay for guitars to buy.” Her five-song EP “Starfire” was named after a guitar he gave her.

She has done her parents proud, I’m certain. Smith recently signed a record deal with Monument Records. She will join Faith Hill and Tim McCraw on their Soul2Soul World Tour this summer, and her “Starfire” LP will be released later this year. She co-wrote the Meghan Trainor and John Legend duet hit, “Like I’m Gonna Lose You”, which went to number 1 on Billboard’s Adult Top 40. And she also boasts writing credits on platinum hits for artists such as Kenny Rogers, Lady Antebellum and Garth Brooks, who is one of Caitlyn’s biggest fans.

Caitlyn, center, grew up in Cannon Falls. She and her band return to perform for hometown crowds at her alma mater, Cannon Falls High School. *No, they do not play the tubas during performances—but I bet they could!

At SXSW 2017, Brooks said, “No offense to anyone else, she is definitely one of the top female vocalists I’ve ever heard in my life—one of the best ones, one of the most talented ones, and one of the most sincere ones.” Smith is flabbergasted by such kind words and still can’t quite believe she works with such superstars like Brooks.

“I was in Nashville one day and was using my phone to find my way to a writing session. The GPS was going crazy and trying to send me to Tacoma, Washington. That’s the day I wrote ‘Tacoma’ with Bob DiPiero. Things like that make me believe in magic every day.” Brooks recorded the song, and Caitlyn performs a powerful version of her own on “Starfire”.

The success of “Tacoma” doesn’t stop there. Smith recently premiered her documentary, “All the Way to Tacoma”, at the Nashville Film Festival. The film follows Smith and five fellow songwriters on an Amtrak trip from Memphis to Tacoma, writing and stopping to perform along the way.

“There I was sitting on my guitar case, in the pouring rain, sobbing.”

Smith’s breathtaking success hasn’t come without any hiccups, however. She penned “This Town Is Killing Me” as a love/hate letter to Nashville and the trials and tribulations that come along with being a singer/songwriter. “I’ve heard ‘no’ more times than I can count. It hasn’t always been easy.” She recalled one particularly disappointing day that stands out in her mind. “I went to a meeting at Sony Records one day, and I was thinking ‘This is going to be easy. I’m going to get this record deal.’ I played my heart out and they were like, ‘Thanks for coming.’ That was it. Nothing. I was so disappointed. I went outside to wait for my ride and it started pouring rain,” Smith laughs. “It was like a movie scene. There I was sitting on my guitar case, in the pouring rain, sobbing. I thought it would end so differently.”

Smith recognizes the lows are all part of the process, which makes her all the more grateful for the highs. “There’s so much I would tell that girl. I know now that I wasn’t ready. But seven years later, here I am; I’ve signed with Sony Records through Monument. So it all worked out.” And it’s not lost on Caitlyn, she’s still a little shell-shocked by everything and celebrates all her victories, big and small. “I was in Home Depot the other day and heard one of my songs come on and I wanted to tell everyone to stop and listen. It’s surreal. It’s crazy. I don’t think I will ever get completely used to hearing my songs on the radio.”

Well, I think she better get used to it, because big things are happening for this small-town Minnesota kid.