When Sean Cook recalls his path from small-town Minnesota to the bright lights of Hollywood, he starts humming the Beatles’ tune “The Long and Winding Road”.

“The techniques out of England were very different from the ones we were learning in the States.”

After graduating from Cannon Falls High School, Cook thought he would pursue a degree in Psychology at University of Wisconsin—Eau Claire, but he found himself getting frequently sidetracked. “I was thinking I was going to do some kind of therapy or community outreach thing, but I kept ending up in the theater department. I couldn’t get out of it.”

A year and a half later, he was on his way to study at King Alfred’s College in Winchester, England, as part of an International Student Exchange Program offered through the college. Six months of theater study across the pond opened Sean’s eyes to a new way of acting. “The techniques out of England were very different from the ones we were learning in the States. They were more outside-in as opposed to inside-out,” he explains. “You start with the body, the physicality, the voice, and then the emotion follows that. It was fascinating to incorporate that into what I was doing in the United States.”

Returning to Wisconsin with his love for acting galvanized, Cook enrolled in a National Student Exchange Program and headed to Western Washington University, where possibilities seemed endless for the young theater student. “I was amazed by the amount of work I could do at Western. Even if I was cast in everything in Eau Claire, I could be in maybe six shows each year. At Western Washington University, I could be in six shows all at once.”

Cook gravitated toward these opportunities and decided to stay. “I really dug it, and the West Coast in general. I ended up staying there, getting in-state tuition and completing my degree.” 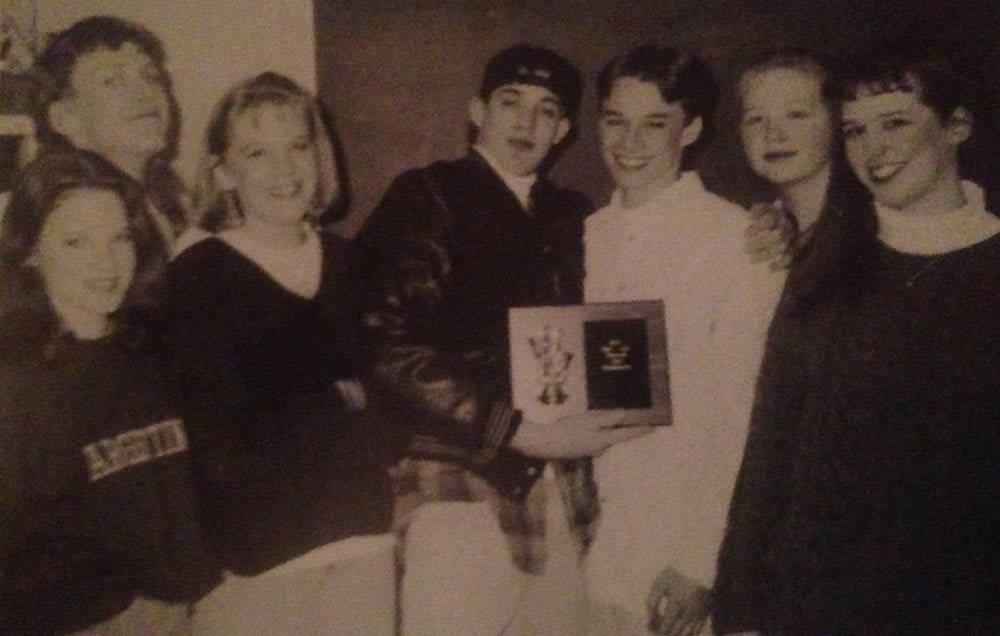 Sean, third from the right, found a love for storytelling while competing on the Speech team and in One Act Plays at Cannon Falls High School.

After graduating, Sean continued to learn and grow as an actor. In 2001, he helped found iDiOM Theater in Bellingham, Washington. “That’s where I learned how to produce theater, how to direct it and market it outside of the university system. It was training on the ground.” The theater is still operating today, and Cook reflects with pride, “It was an amazing thing to build. I look back now, so many years later, and the theater is still thriving. In fact, they’re moving into a much larger space now, and I’m part of the fundraising campaign on that.”

“After I got off the phone with the casting director, I fell on the floor—very dramatic—just so overwhelmed with that dream coming true.”

Cook’s next move was to Seattle, where he joined Actor’s Equity Association (AEA) and achieved one of his greatest goals of stage acting. “I remember when I got the phone call for that play when I obtained my union card. After I got off the phone with the casting director, I fell on the floor—very dramatic—just so overwhelmed with that dream coming true.”

After a few years of stage work, Cook got a taste for film and joined the television union SAG-AFTRA. “I loved working for the camera and wanted to do film and television. After about four years, I knew I needed to move to either LA or New York to continue working.” He chose the former, got an agent and got busy. “I started studying camera technique and taking improv classes. I did scene study classes with some renowned teachers,” he explains. “If you want to train to be an actor, train in Los Angeles. All the best people are here.”

“I turned to my wife and said, ‘Are you catching this?’”

Cook’s training has certainly paid off. He’s appeared in movies such as “Knights of Badassdom” and “The Hit List” as well as popular television programs like “Criminal Minds” and “Grimm”. He recently worked on the pilot for Seth MacFarlane’s new show, “Orville”, which will drop later this year.

With a laugh, Sean recalls the night he and his wife attended the wrap party at MacFarlane’s house. “We were at one of the buffets, and I was perfectly happy to have a conversation about how beautiful his home is. Out of nowhere, he thanked me for my work. He said I did a really wonderful job, made the part my own, and it was key to the success of the pilot.” Cook recalls being a bit surprised and humbled. “I turned to my wife and said, ‘Are you catching this?’ It was a really wonderful moment.”

“If you find someone you like and they are willing to be open with you, make them a friend for life.”

High compliments help Cook feel assured that he’s made a smart choice with his profession. And he holds two special women in high regard for the influences they’ve had on his career. The first is his high school speech coach, Jeanne Bain. “She was instrumental in helping me recognize I was there because I was able to tell stories. I was able to communicate in a way that other people couldn’t. She taught me I was unique and could help others heal or laugh or even escape.”

Later in his journey, Sean met Nike Imoru. “I asked her to be my mentor when I was a junior at Western Washington University. I turned to her for all sorts of advice.” Years later, she is still a critical part of his life and career. “She’s now a casting director, so she knows what goes on in the industry. She can relate insight when I need it—whether it’s industry or personal stuff—she’s been there for a lot of it. So much in this industry blows away in the breeze, so my point here is: If you find someone you like and they are willing to be open with you, make them a friend for life.”

That isn’t Sean’s only advice, particularly for young people considering a similar career. “I want those kids to listen to their heart. If your heart tells you that you’re here to tell stories, then believe that and follow it and love it.” His words of wisdom carry over to the parents of these inspiring entertainers. “Support of a young artist—a young person, in general—is so integral. Be supportive, give them opportunity. Let them be creative. You may not always understand where those creative impulses are coming from, but perhaps your child is here to teach you to experience the world in a new way.”

It’s obvious Cook is speaking from experience, and his upbringing created a solid base for a well-adjusted gentleman in the cut-throat industry of “Hollyweird” (his term of endearment). “I still consider myself a Minnesotan. I say hello to everyone on the sidewalk. Most people don’t say hi back, but that’s okay. I lead with nice, and I lead with warmth.” He credits his Minnesota roots and Midwest work ethic for a lot of the success he’s realized. “You have to be dedicated. You have to wake up and do the thing every day. It takes a lot of energy and a lot of work, and you have to be ready to do it.”

“The real struggle is the ebb and flow of the industry; when will I work again?”

Sean admits all the work ethic in the world doesn’t protect him from the many actors’ struggles, although credits on some major television shows and hit motion pictures don’t hurt. “I may have access to meetings I didn’t before, but I’m not immune to the difficulties.” He elaborates, “The real struggle is the ebb and flow of the industry; when will I work again? As an actor, you’re always interviewing for a job. I have an interview in two hours and another one tomorrow morning. It’s the anxiety that comes with the fear of the future. My great challenge has been trying to stay in this moment.”

Cook seems to have figured out how to combat the uncertainty by finding consistency outside of the industry. “This time, this life, this place; it’s not just about money and acquiring things. It’s about trying to remain stable as a human, as a person in the world, even without the consistency of work. So, other parts of your life have to become important. Be a good husband or father or mother, be committed to your community, stand up for what you believe in. Enrich your lives.”

“When my Mom was recovering from cancer treatments, Chris would send my folks a week’s worth of food so that my Dad didn’t have to pretend to know what he was doing in the kitchen.”

One way Cook enriches his life is by returning to Minnesota regularly. “My wife and I get back at least once a year—usually for the holidays or a summer trip.” They spend their time jiggering for crappies and visiting with family and lifelong friends. “One thing that I find to be specific and wonderful to Minnesota is the ‘visiting’ portion of family events. There is always an allocated time for it. You know, you have coffee, the kids play—I’m usually heavily involved with that portion—and then ‘visiting’ commences.”

Cook and his family have started a tradition of “visiting” the restaurant owned by his childhood friend, Nick’s Diner in Cannon Falls. “Chris and Barb Weigman own it. I was an unofficial fourth son to Gary and Nancy Weigman growing up. When my Mom was recovering from cancer treatments, Chris would send my folks a week’s worth of food so that my Dad didn’t have to pretend to know what he was doing in the kitchen.” Sean understands this is an invaluable characteristic of the home state he loves. “That is the kind of care and action you can expect from a neighborhood friend from Minnesota.”

And while it may have been a long and winding road from Minnesota to Hollywood, it’s things like this that keep bringing Sean back.